Novosil - is the birthplace of the ancient craft of the Chernyshen clay toy, which has the color of the beliefs of pre-Christian Russia. Some of the largest elevation differences in central Russia along the banks of rivers create an ideal place for such extreme sports as para - and hang gliding. The purest water of the upper course and the measured nature of the Zusha River makes it one of the favorite routes for kayaking lovers of active recreation. A special attraction is the place of the foundation of the city – "Cautious Mountain", whose archaeological finds indicate that Novosil is one of the most ancient cities in Russia.

The feeder, the maiden bird, and the cuckoo

Chernyshenskaya toy-a Russian art craft that originated in the village of Chernysheno in the territory of the modern Orel region, which has long been famous for its skilled toy makers. The stories of the toys are original: a feeder, a virgin bird, a cuckoo. The image of the cuckoo is closely related to the customs and beliefs of the ancestors.

The cuckoo - "God's bird", foreshadowed the terms of life, as well as the fate of not only man, but also natural phenomena – was a bird image of a female deity, endowed with the secret power of prophecy. The amazing spring rite "The Baptism and Burial of the Cuckoo" has also been preserved in these places. Young girls in the "cuckoo time" (from Ascension to the Spirit of the day (Trinity) are united in a secret union between themselves and the higher power in the image of the cuckoo.

A wet nurse is an image of a wet-nurse mother. It is given for the continuation of life, protection of a person and family from disasters. She managed to preserve, to carry through the millennia, the oldest symbol associated with the cult of fertility — clearly exposed nourishing breasts. This sign indicates the pagan origin of the Chernyshen toy, when it was not an object of fun, but the object of a cult, the roots of which go back to the ancient matriarchy and the Slavic tribal veneration of women in labor. 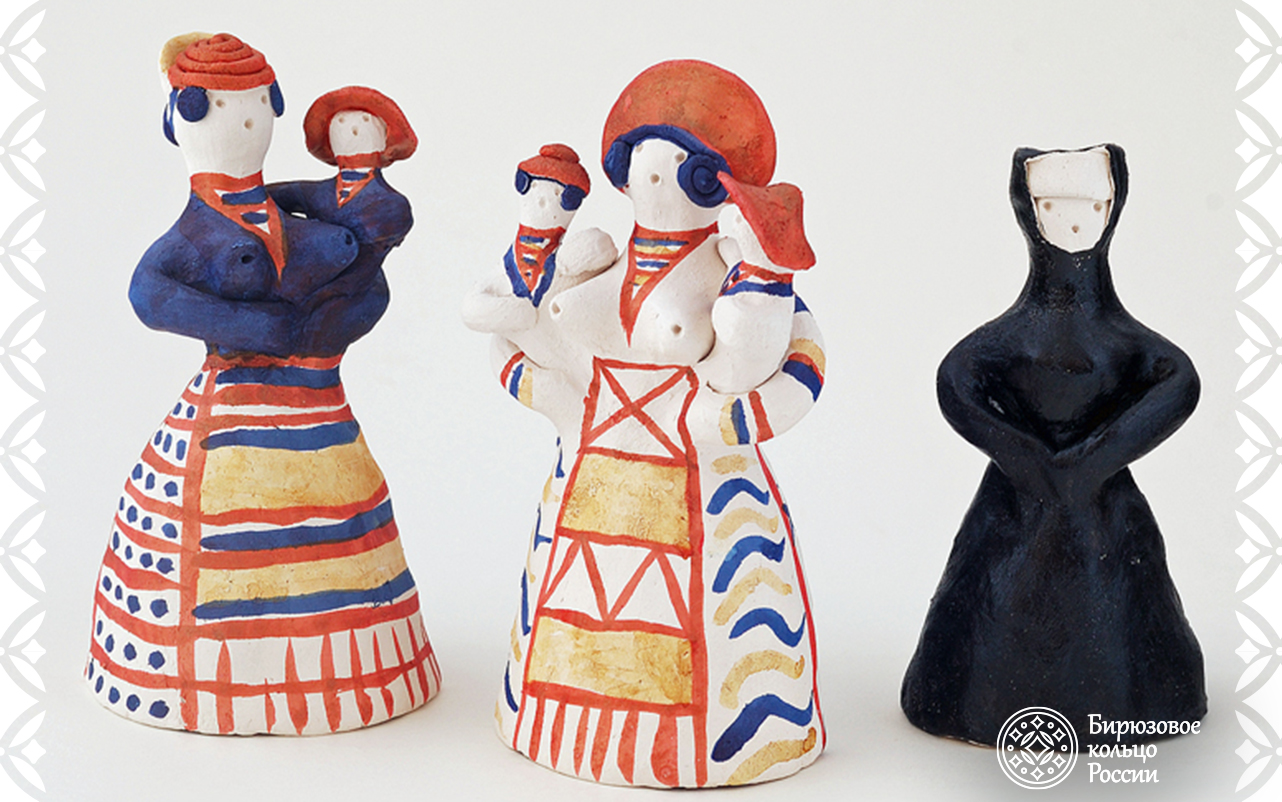 The village of Vyazhi near Novosil stands on the Zusha River, which originates at the highest point of the Central Russian upland. This is one of the best places for paragliding within a radius of 400 km from Moscow, which is why it is popular among paragliders in the capital and other regions.

Within a radius of 10-15 km from Vyazhey there are slopes for all wind directions except south-east. The main slope in the village of Vyazhi is a horseshoe formed by the high bank of the Zusha River and oriented to the west. Its maximum height is 60 meters.

Features of the Land allow you to engage in spearfishing and kayaking. Among the locals, there is a belief about the feeding of the river from underwater lakes and rivers. 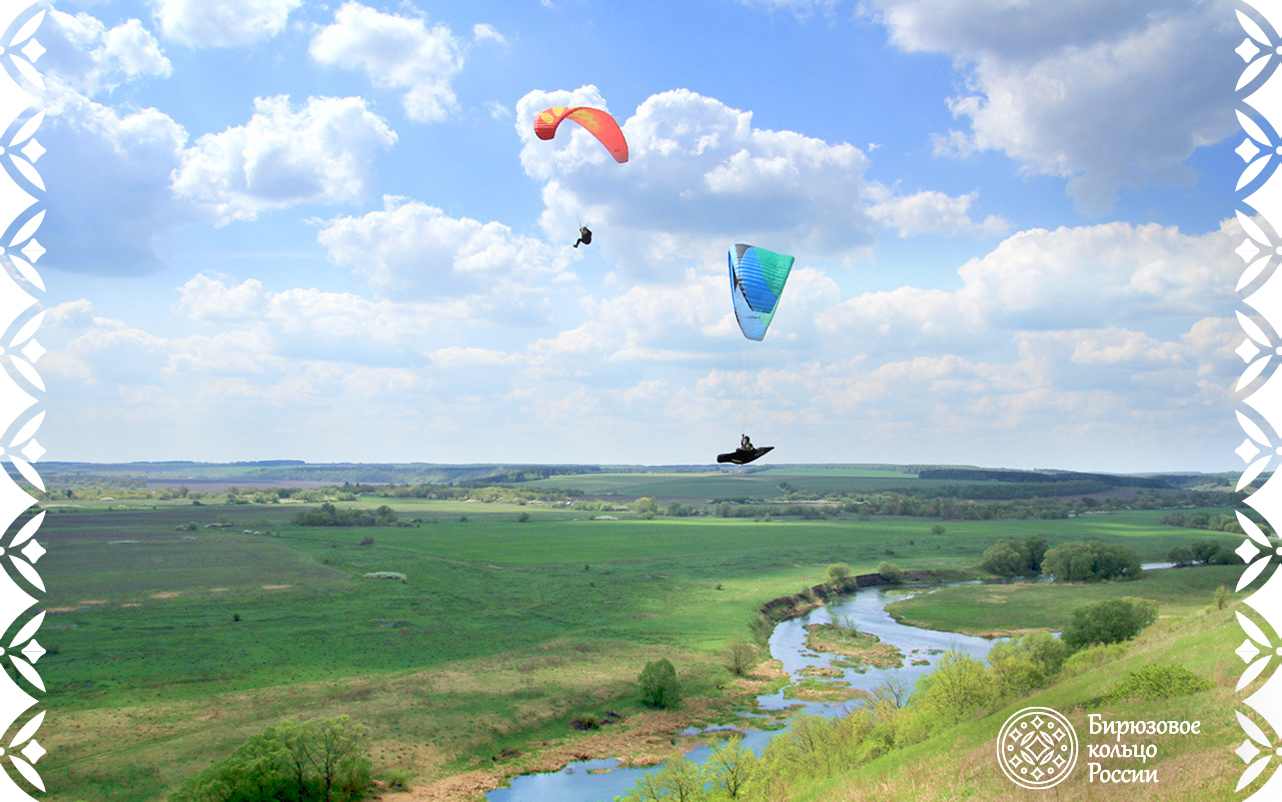 The coolness of the river, the gentle sun, the fragrant greenery-this is how a typical day passes for a lover of kayaking. Over the weekend, travelers with no experience of water hikes have a great opportunity to "reboot" and take an interesting route that is filled with historical objects that tell about the ancient history of Russia.

A rich program does not allow you to get bored. The picturesque landscapes of the river with its high banks and clear water, as well as a visit to the fortress of Ostrozhnaya Gora, one of the oldest cities in Russia, Novosil, the Holy Spirit Monastery and the military-historical memorial "Vyazhi" will give you a vivid and unforgettable experience of a water trip.

Evening gatherings around the campfire, the starry sky, a camp bath on the river bank will not leave time for thinking about work during the evening rest.

Sleep after an active day is usually deep and serene, and the morning will meet with dew and gentle rays of the rising sun. 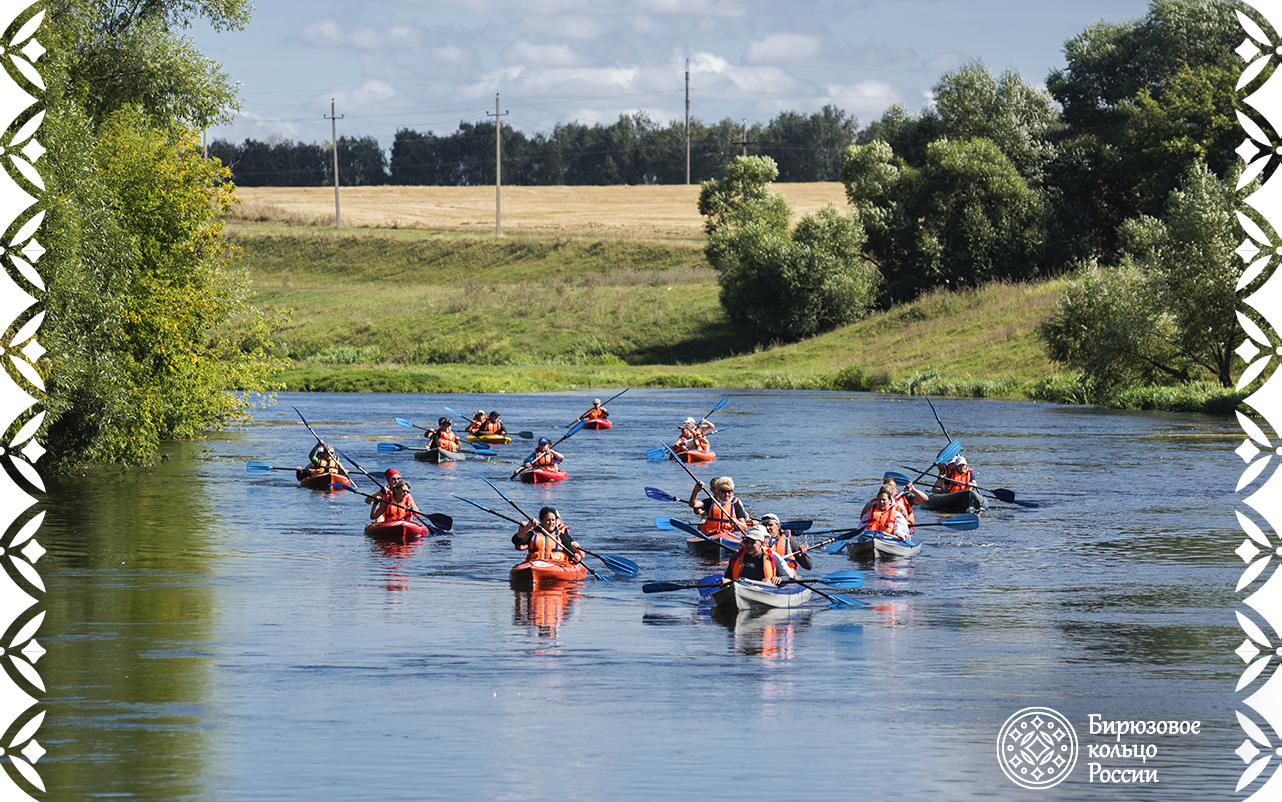 Historians still argue, from which phrase did the name of the city of Novosil come-New village (village, village) or New power (fortification, fortress)? And even regarding his age, opinions differ. Novosil was first mentioned in the Nikon Chronicle in 1155 as a city of the Chernigov Principality. According to this version, he was 866 years old. But there is another indisputable fact: archaeologists have discovered near Novosil four settlements dating back to the IV-I centuries BC. And during excavations on the territory of Ostrozhnaya Mountain, the site of the city's foundation, the most valuable and rare find was discovered – a coin of the Panticapean king Asander. And this is the first century BC! There are only a few such coins found all over the world, the Novosilskaya is only the nineteenth in a row!

So it turns out that no one can reliably say what age Novosil has. The history of this city is still an unsolved mystery and it is possible that it will still amaze us with new sensational discoveries. And if you are attracted to historical mysteries and at the same time you are wondering where to spend the upcoming weekend, then welcome to the ancient Novosil!

Facts from the depths of time

* According to medieval chronicles, on the way from Suzdal to Kiev, Yuri Dolgorukov's wife, Princess Olga Grechanka, visited Novosil. At that time, Novosil was one of the fortified points of the defensive line on the southern borders of the Russian state - the Great Zasechnaya line, and the princess could feel completely safe here.

• In 1619, the Holy Spirit Monastery was built in Novosil. In 1644, it was visited by the Russian tsar Mikhail Fedorovich, who came to inspect the Novosilskaya fortress. The monastery, although in a modified form, existed until the Soviet era. In 1925, the Bolsheviks abolished it, in 1934 they blew up two of its churches, and the third – the church of the Life – Giving Trinity-was taken under a warehouse of grain and spare parts. The Holy Spirit Monastery was revived only at the end of 2005, now it operates and gives pilgrims stunning views of the Zusha bend and fields on the low opposite bank.

* Speaking of Novosil, it is impossible not to recall the famous Chernyshen toy, which has long been the main artistic craft of women in the village of Chernysheno, Novosilsky district. The surroundings of this village were rich in colored clays, from which Chernyshen toys were made, which were closely related to the beliefs and rituals of the peasants. The cult was the cuckoo, which was considered a bird image of a female deity. This trade has existed in the village almost to our times. The last hereditary Chernyshen craftswoman was the People's Master of Russia Anna Kharitonovna Afanasova. Her toys are presented not only in Novosil, but also in the All-Russian Museum of Decorative and Applied Arts in Moscow, and other museum and private collections.

Where to visit and what to see

* Former estate of the Princes Golitsyns
It is located in the village of Golun, located on the way to Novosil. This village was acquired by the Golitsyns in 1780. Since that time, more than two and a half centuries have passed, but some of the buildings of the estate are still well preserved, for example, the cattle yard, stylized as a small fortress. It consists of a series of one-story buildings, united by a low brick fence, at the corners of which round turrets are installed.

• Village of Vyazhi
This historical place is located 14 km from Novosil. It was from here that the Kursk counteroffensive of the Soviet troops, known as the Battle of Kursk – the bloodiest battle of the Great Patriotic War-began in 1943. There are still remnants of trenches, dugouts, craters from bombs and shells. 850 Soviet soldiers and officers are buried in the Vyazhevsky Memorial Complex.

* Local History Museum of Novosibirsk
Part of the museum's exposition is also devoted to wartime, but this old building - the former home of the merchants Vorogushins – contains many other interesting facts. For example, you will learn how the Novosibirsk squad took part in the Battle of Kulikovo in 1380. And about the coat of arms of the city of Novosil, which depicts five azure cornflowers on golden stems and four golden ears. And you will also see several unique non-man-made vessels, the origin of which has not yet been solved. Guides tell a lot of interesting and useful things about each exhibit.

* Monument to the soldier
It stands in the center of Novosil. On the pedestal – a very young recruit before being sent to the front. He is escorted by a woman who clings mournfully to the soldier's shoulder.

* House of Culture of the city of Novosil
Carefully restored building of the 70s of the last century. It is unique for its painted facade in the sgraffito technique, which always attracts the attention of visitors to the city. In particular, images of pioneer flags and bugles that evoke nostalgia among the older generation.

* Paragliding club and bathhouse at Alla
You can go for a weekend break to the village of Vyazhi, near which there is a paragliding club. From a bird's-eye view, you can see all the beauty of the Central Russian Plain. Paragliders are happy to stay with a local resident Alla Akimova. She always has a warm welcome, a heated bathhouse and a good company in which to spend a pleasant time. You can come to the Alley at any time of the day or night, but it is better to warn her a day or two in advance.

To complete the story about the ancient city of Novosil and its surroundings, I want to use its modern "brand" - the popular phrases "nizya" and "asisyai", which belong to the sad clown, the founder of the theater "Litsedei" Slava Polunin. He was born and raised here and it is planned to establish an annual clowning festival in the city soon. So you will have another good reason to spend a good weekend in the diverse Novosil!

How to get from Moscow

Novosil is located in the east of the Orel region, on the high bank of the Zusha River (a tributary of the Oka). From Moscow to it 360 kilometers. It is a 5-hour drive away. The bus ride from the Moscow bus station Novoyasenevskaya will take from 5 to 6 hours, and by train from Kursky station can be reached in 4, but you will have to get off at the station Zalegoshch, which is 14 km from Novosil, because there is no train station in the city itself.